A great resource for sites that accept self-published books. You should bookmark this link if only for the fact that it puts a lot of great sites in one location. Use caution though and make sure you do the proper due diligence for each site before handing over your money. As SPR says, “the top ten are those sites where authors have had the most success (not BookBub success, but…success).” One author’s success is another author’s mediocre or, worse, absolute failure.

Another batch of tweets from the last few weeks that you might find of interest.

Know a writer or reader? Tell them about the 2015 Create Something Magical #Conference – http://t.co/jUFsBFrPul @LSFWriters

21 Fast Hacks to Fuel Your Story With #Suspense http://t.co/3s781KaOHv #amwriting

So, as I mentioned previously, I ran a $15 ad with eReader News Today (ENT) on Saturday, December 6th. I’m really quite pleased with the results, especially given the cost of the ad. Saturday produced 71 sales and another 14 on Sunday. At $0.69 royalty per book, I’ve almost quadrupled my investment. It was enough to push Danny Dirks to the very top of its sub-categories, which was a first.

Even more interesting to see was the change from Saturday to Sunday in the sub-categories displayed. Note the two “Myths & Legends” categories in the image above. Now day 2:

I’ve never seen this with any of my other books. Not complaining though, because I think the latter categories are better, but strange to see it change in a 24-hour period.

So, definitely recommend giving ENT a shot. Your experience might be different. I’m sure genre, day of the week, and other variables can affect sales. But, at $15-$30 for an ad, you’re chances of breaking even are quite good. Also, it’s hard to tell how many copies of the book sold because of the ad and how many sold due to visibility after it climbed up the charts a bit. Either way, the ad definitely was the only catalyst to sales, so that makes me happy. Hopefully, that visibility will carry through over the next week or so.

Had experience or planning to advertise with ENT? Let us know in the comments. Thanks for stopping by! 😀 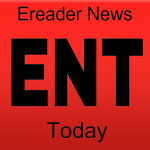 I have an ad running today to promote my Kindle Countdown for Danny Dirks over at eReader News Today (ENT). I paid $15 for inclusion in their email list, a post to their blog, and a Facebook post. Their Facebook page has ~475k followers, but knowing Facebook, only 400 people will see that post. ENT recently changed their advertising format to mirror that of BookBub, but I don’t think they’re anywhere near the same scale (yet). At $15, I only have to sell ~22 books to recoup the fee. ENT’s book of the day feature is much more reliable, but nearly impossible to land. They have a one-time submission at the beginning of the year and then fill all of their slots in one shot. But, with a rate of $15, it’s hard to not give their new email venture a try. There are certainly more expensive and less effective venues out there. Stay tuned as I’ll post a follow up later this week for those interested in the returns.

Have experience with ENT? Let us know in the comments below and thanks for stopping by!

Let’s face it, everyone pretty much knows about BookBub (if you don’t, feel free to read up on my own personal case study). But, the ‘Bub can be a tough nut to crack and they won’t just keep running the same books over and over. And, while free works, occasionally we’d like to get paid for our writing. 😉 So, what are the second-tier options for my discounted, but still paid book? Check out some of the options below. In no particular order.

Now, while I’d like to say that the ROI is as solid for these as BookBub, that just isn’t the case. Make sure you do your homework before running an ad with ANY site. Some genres do better than others. They might have a big mailing list, but unless it’s segmented by genre, you could be sending your high fantasy novel to romance readers. Remember to temper your expectations. Be comfortable in the amount you’re investing, as you may not see a dollar for dollar return. Judge success on your own scale and understand that what works for one may not work for another.

Do you have experience with these or other advertising sites? Share with us in the comments and thanks for stopping by!

Whenever discussing a marketing plan for self-published books, I make a point of saying, “Books don’t sell themselves.” You have to get it out there in front of readers. You have to be willing to spend money in order to make money. But, some books seem to need little more than a nudge and they’re off to the races. And, why is that? Case in point, my third self-published book (and, technically, first by me). It’s not breaking records by any means, but it’s the first book I’ve put out that manages to sell 1-2 copies a day with little (I ran a small ad back in mid-September) to no marketing on my part. Compare this to my other novels, which are adult suspense/thrillers, and could collect a ton of dust (and have!) if I didn’t promote them on a regular basis. So, what are some factors that might affect this? Let’s take a look at just a few possibilities.

1. Quality of the writing – Truly bad writing won’t sell. I don’t care how much you promote it. I’d like to think that, while my writing is far from perfect, it’s at least good enough to entertain readers. And, to me, that’s one of the most important qualities to have.

2. Genre – Let’s face it. Some genres just sell better than others. I personally know a few people who churn through 5-6 erotica or romance novels a month. And those types of readers are often not picky about who they read next or who published them. They’re just looking for a good, well-written story. Romance sells. Self-published romance sells and competes very well with the top traditionally published authors. In fact, I’d argue that you can’t find the same level of competition in other genres, but that’s just my unscientific opinion. If you write erotica, I envy you. If you write good erotica at a high rate of speed, you can be a money-making machine. Honestly. They’re out there.

3. Topic/Category – So, you’ve got a well-written story in a genre that should be selling, but still no luck? Well, maybe rollerskating detective nuns aren’t everybody’s thing. Seriously, though. Maybe you’re topic is too niche. Or, is your story so mainstream that it looks like everything else in its category? This “factor” could go both ways. If your story is too different, you may find that new readers won’t take a chance on it. But, if your story is too similar to every other book in its category, you may find yourself competing with the big boys (and girls).

So, why does Danny Dirks sell with little to no promotion (in multiples countries, mind you)? Well, I think it gets help from all 3 of these factors. I think it’s well written, it’s a YA fantasy with dragons, and there isn’t a ton of competition in the “Arthurian” category (apparently). Even at a high ranking (see example below), it still graces the top 100 of 3 sub-categories.

What do you think are some other key factors that might make a book “sell itself”? Let us know in the comments and thanks for stopping by! 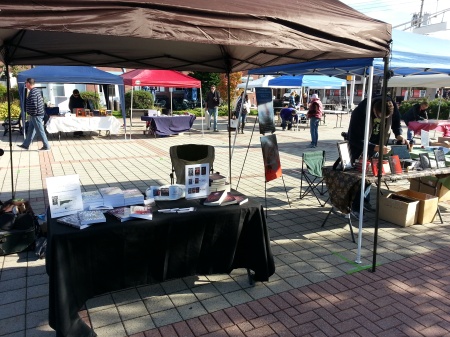 I took this before I had my standing banner up (wind was an issue), but now I think I have to get some book stands… yep. Looks too flat.

I did a book show on Sunday for the first time in what seems like a long time, though it was really just last year. I’ve done several shows since first publishing in 2011 and I was a little bit excited for this one. With doing physical shows, it can help to have a short-term memory. That isn’t to say you should forget what worked and what didn’t, but you should be able to go into it with a fresh attitude. It’s probably why I don’t do more than a couple of shows a year.

I sold 6 books in 6 hours. Three to one person. It’s actually as good as I’ve ever done at this kind of event. Now you see the need for the short term memory. Shows aren’t (typically) money-making events. They’re face-time events.

I considered the day a success, but not just for the sales (which did help me break even for the costs), but the simple fact of getting out and talking to readers and fellow writers. I spoke with many people, gave out a lot of business cards, and chatted with my booth neighbor, horror/sci-fi/paranormal author K. Edwin Fritz. It was a beautiful day and we had some laughs and shared stories about writing and publishing. We each had some sales and chatted about best marketing practices both in person and online. It was refreshing.

As it turned out, the town of Belmar was also having an Octoberfest that day. There was great foot traffic, but the most common thing I heard was, “I didn’t know this was going to be here today!” So, lots of foot traffic, but little in the way of book buying traffic. There were about 25 spaces, but only 20 authors showed, which was fine. They also tried doing panels and readings but, apparently, they didn’t realize there was going to be a live band right in front of the square where we were set up. Hey, it was their first time doing this, so things like that will happen.

I’ve got one more scheduled book-selling event this year, in November. And, while at this show, I was approached to speak at the New Jersey Speculative Fiction Writers monthly meeting next year. Looking forward to that opportunity. I’m also looking forward to doing a few more shows next year. This was my first with more than one paperback. With luck, I might have a fourth this time next year. I’m convinced that having more books helps to sell more books. It helps if they’re good as well.

If you’re doing a show soon, or considering doing a show, I wish you the best of luck. It’s often what you make of the experience that makes the event successful or not.