Alright, so after allowing myself a moment to break down yesterday, I’m back. I can’t change what has happened. I just have to move on. I was made to feel much better after watching a very inspiring TED talk. I highly recommend it, if you have 20 minutes. It’s all about figuring out your “Why?” Why do you do what you do? Mainly, because the answer to that question often means more to people than the end result (eg, the books you write, the widget you produce). 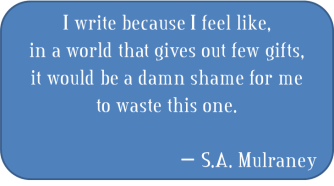 I first started writing because my mother told me I was good at it. No lie. I also had fallen in love with the idea of being a writer. That was a long time ago. Since then, I’ve realized that I enjoy the process of telling a good story. I enjoy the end result of a pleased, smiling audience, whether it’s a verbal story or one in print. I enjoy communicating my views on life through fictional characters. Sometimes it’s easier to speak the truth when it’s a fabrication. I love knowing that, perhaps, I’ve touched someone with my writing. I love to think that, through my words, I’ve managed to communicate on the same wavelength with someone I don’t even know. I’m driven by having had that feeling myself when reading a good book. I want someone who reads my stories to think, this is someone who has thought about life in a way that I hadn’t considered before and it’s made me think about it too. I write because I’m afraid that this is the only way I’ll be heard. I write to leave something of signficance behind, even if it is only one brilliantly written line. I write about normal people who have extraordinary things happen to them because I am that normal person who craves the extraordinary, but who will never seek it out. I write because it gives me unlimited control over the world when the one I live in is often so out of control. I write because I feel like, in a world that gives out few gifts, it would be a damn shame for me to waste this one.

This is why I write.

I hope you figure out your why. I think you’ll be glad you did.